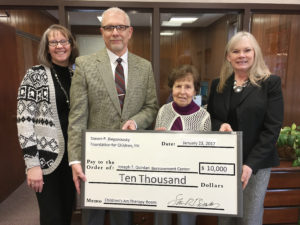 Steve Bieganousky, founder of the Steven P. Bieganousky Foundation for Children, Inc., presented a check for $10,000 to Joseph T. Quinlan Bereavement Capital Campaign committee members. The donation will benefit the Family Therapy/Children’s Art Room at the new, permanent home of the Bereavement Center on 5 Plains Road in Augusta. The Bereavement Center, currently located on 61 Spring Street in Newton, expects to take residence in the new center in early April.

Steven P. Bieganousky was a 21 year-old Sparta resident who died suddenly in a car accident on March 27, 2005. His father Steve Bieganousky wants to make sure his son’s devotion to children lives on.

“It was heart warming to know that Steven had positively touched people’s lives of
all ages.” -Steven Bieganousky

Money raised through the foundation will be distributed to local agencies providing educational, recreational and health programs for children in Sussex County.

Although The Bieganousky’s know nothing will ever make things the way they were when Steven was here, they believe the new foundation is a fitting tribute and the perfect legacy for a son taken too soon.

“I was so proud – it was what kept me going – he is my hero.” -Steven Bieganousky